And he's bringing action figures! :D That's right folks, I'm back from a very extended toy-production/social media hiatus to share a very special project I've been working on for the past couple years. Now, some of y'all may be aware that just over 25 months ago, I somehow managed to create a Mini-Me. Noisy. Cranky. Pooping everywhere. All in all, a fine representation of the original. But in a world becoming more and more unraveled by the day, things were hard. And having moved to a different part of the country (twice), we didn't have much of a community to lean on for support. For a time, I didn't know if I'd ever return to my creative pursuits.

But against all odds, our little kaiju evolves more and more everyday towards her ultimate form. And subsequently, I find myself feeling less and less isolated from the rest of humanity. I know this is true. I can tell because the drive to design toys has never left me...in fact, the hunger has only grown in more recent months, commensurate with my mental bandwidth.

So an hour here...an hour there. I managed to steal more and more time wherever I could to devote to CAD-modeling. And now that we're living in a home with enough room to set up my equipment properly, I suddenly find myself at full productive capacity! And what I have to reveal tonight are the fruits of that off-and-on labor from the past two years. 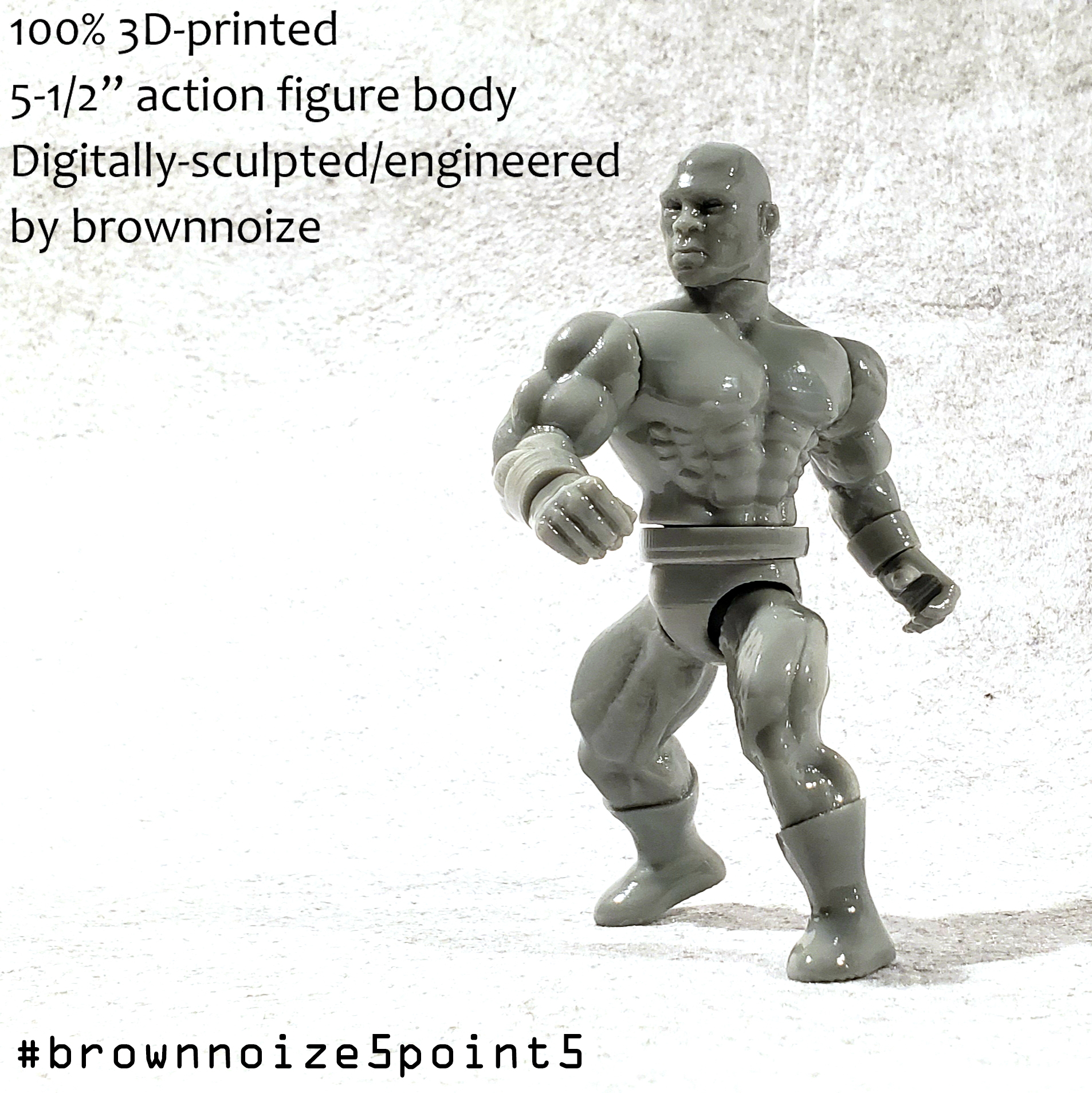 Now, this shouldn't come as too much of a shock to those who've been following my toy-shenanigans over the years. As much as I still love Japanese robot and monster toys, the challenge of designing the more organic shapes inherent in humanoid action figures has proven irresistible. As has the chance to design the sort of cosmic-level superheroes from my favorite comic books! At first, I started on this 5.5 journey by designing armor and accessories for Rampageo Industries and Zoloworld, but that soon expanded to arms, legs, and even heads. Yes, my own characters!

Keep in mind that just that alone--3D-printed limbs for Zoloworld bodies--requires some pretty tricky engineering. Sure, the sculptural aesthetics of the arms and legs needed to look right for a He-Man/Remco-style barbarian "fight figure". But arguably more important is the ability for these parts to interchange seamlessly with their factory-produced counterparts and for the designs to be robust enough to be repeatable every time...from any printer. As you can see from my previous posts below about my character, Quazarec, I think I pulled that off! ;)

But now, we enter the final phase of this quest: a 100% 3D-printable figure buck! Rather than cannibalizing Zoloworld figures for their torsos, we are now able to produce all the major components of these figures in-house. To complete the digital buck, I started modeling the torso and pelvis, and set two familiar goals for myself. First, I wanted the chest sculpt to be styled after the classic Remco body; itself, the inspiration for Zoloworld's human torso. I know it may seem odd not to start with the OG...after all, without He-Man, there would be no Remco 5.5 or any other knock-off lines. But to be completely honest, of all the vintage 5.5" fight figure lines--MotU or KO--I simply prefer the Remco sculpt. The second goal, of course, is to maintain complete compatibility with *both* 3D-printed and factory-produced Zoloworld limbs and heads. 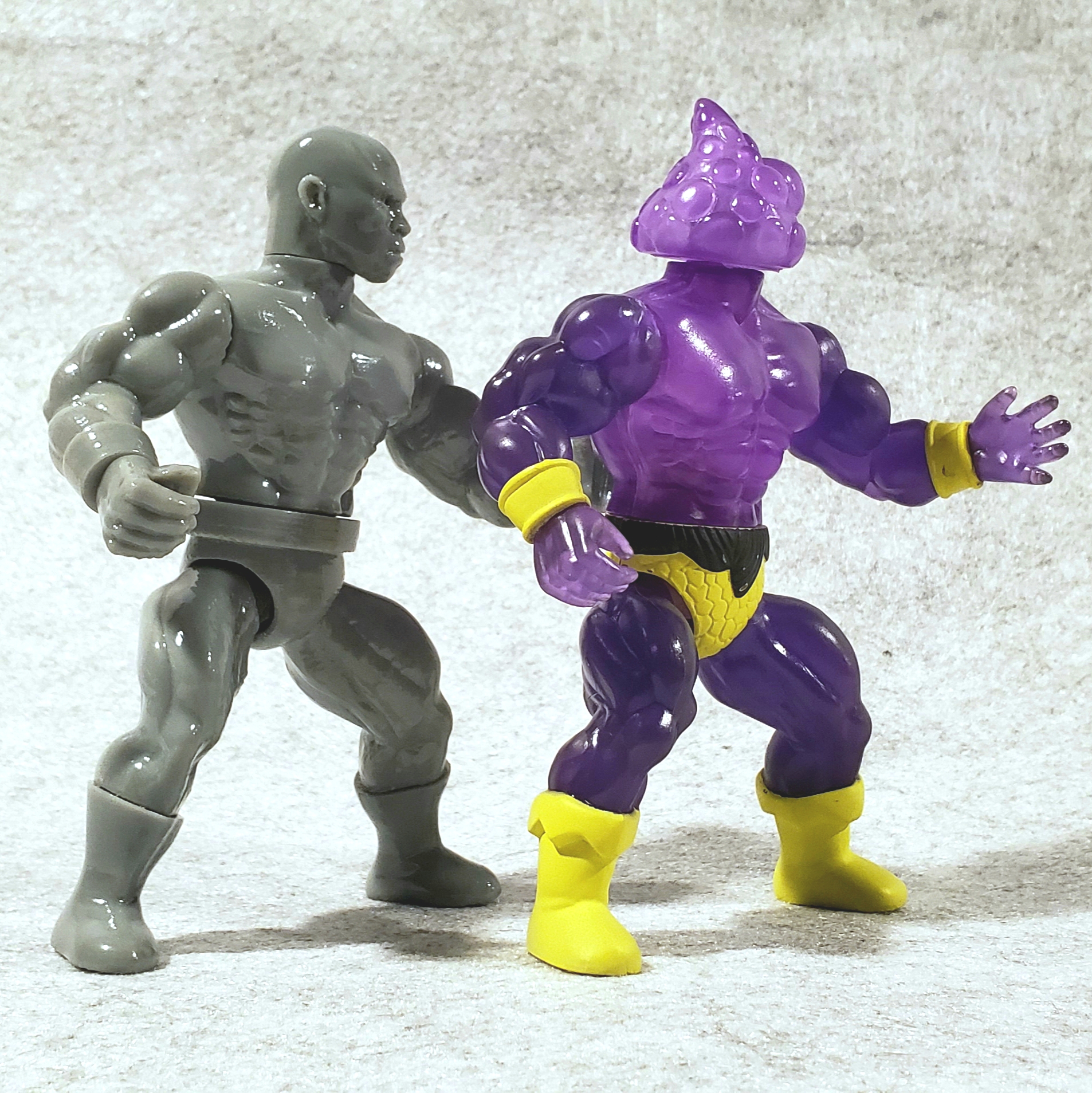 Here's the problem with being a bit of a perfectionist: once I got the torso completed, I immediately started hating the arms! :P See, I actually "sculpted" the original arms to be more reminiscent of the MotU buck. Just scroll down to pics of the earlier versions of Quazarec--the arms definitely resemble He-Man more than a Remco figure. And when I put those arms onto my new torso, they just didn't look quite right. So back to the drawing board! This gave me a chance to model the arms using more advanced CAD techniques learned while designing the torso. The results are far closer to the Remco sculpt, as you can see, and they also have that charming asymmetry that's so pleasing about the original figures. 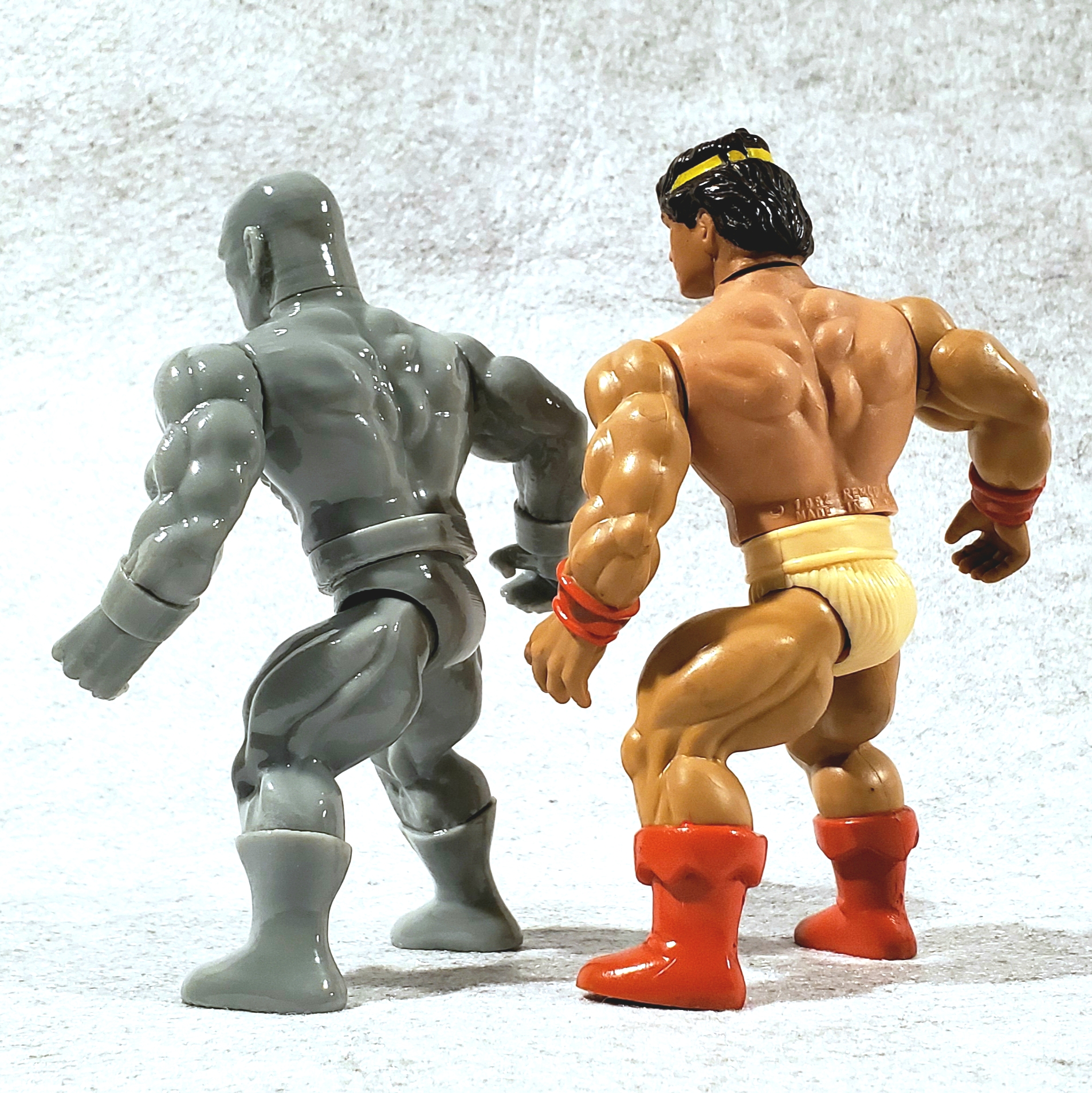 But enough about the sculpt! Let's talk about the features. Again, none of this should be too surprising for those who've been following along, but for any new folks, let's start with the hands. First off, rather than having the traditional open left palm, we have another gripping fist! Dual-wielding weapons? Oh yes, please! The grip on these hands is 5mm, so not only will the weapons we design fit just fine in these hands, but other 5mm-compatible toy lines' accessories will work too (think Transformers!). The hands have a sort of clamp design that allows a 5mm post to be snapped in from the side, as well as threaded through the hole from the top. [Oh yeah, and 5mm accessories fit great in Remco/Zoloworld figures' hands!] 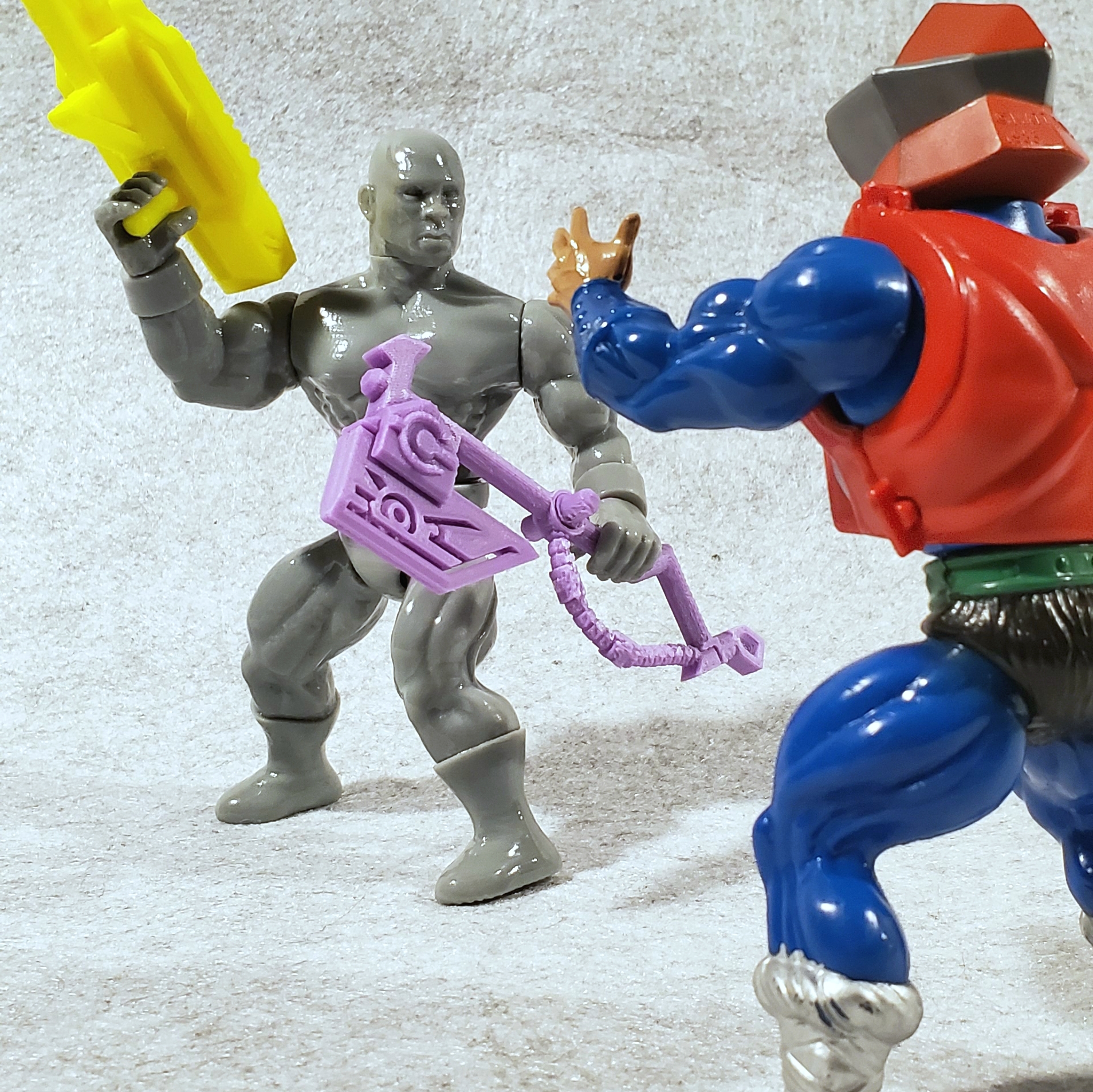 Of course, the hands are pinned into the forearms, so that actually provides us with another couple points of articulation! I've always been a proponent of vintage articulation, but being able to rotate the wrists really adds a lot of character to these figures. But that's not all: the pins, themselves, are 5mm...and removable. That means you can replace these figures' hands with future accessories! A mini-gun, a Mega Man-style buster, a Glyos phase arm...endless possibilities! 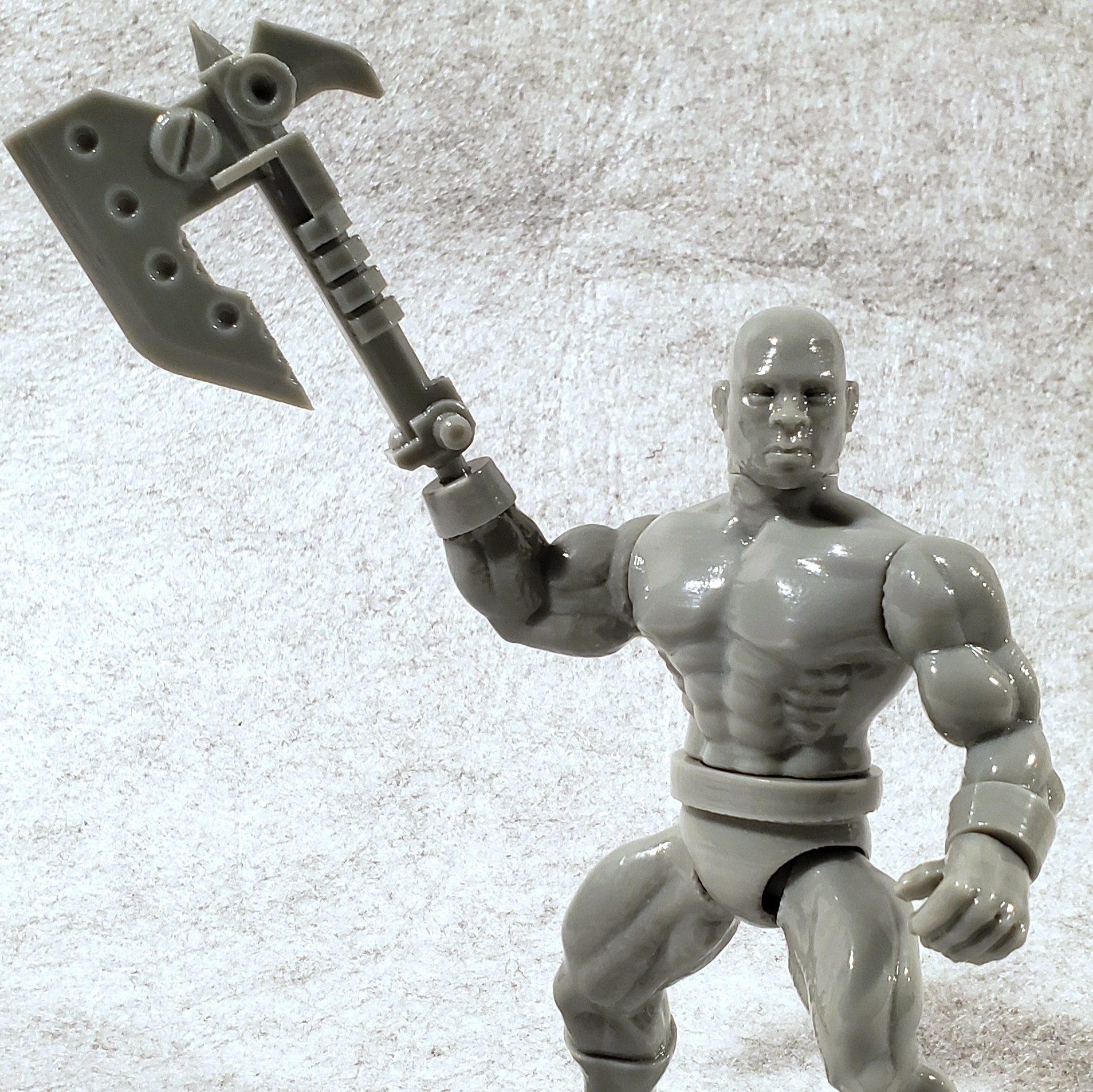 Speaking of 5mm-compatibility and modular junk, I also designed the waist joint to be a 5mm connection. This, of course, allows the figures to rotate at the waist--just like the original Remco's and Zoloworld figures. But it also lets us mess around with some weird options in the future! Imagine a gorgon or a merman...with a snake or fishy lower body! Or, hell, how about a dude with a tank for a butt like the Power Lords Beast Machines? C'mon, who wouldn't want that??? :P 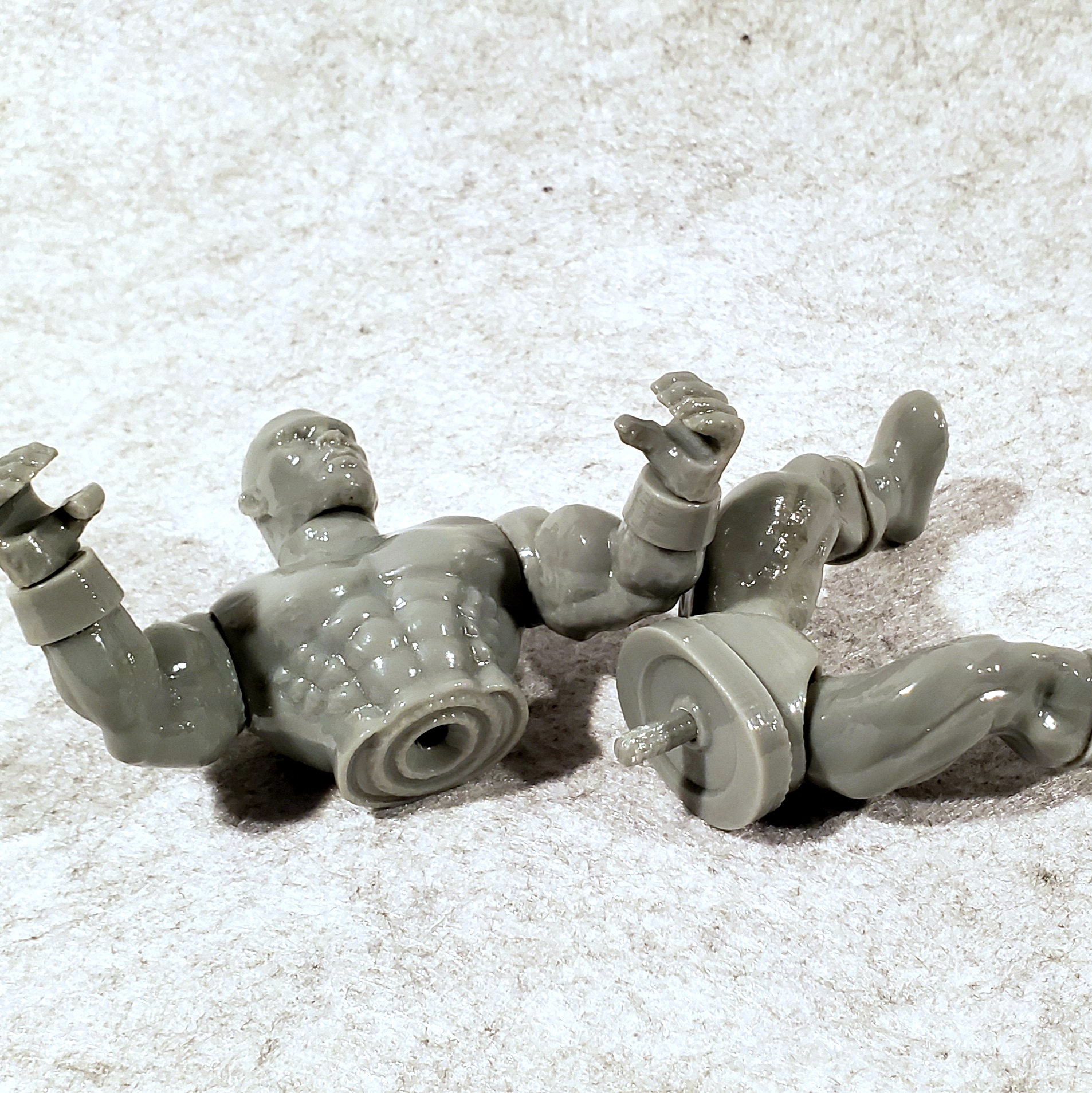 Okay, so we've talked about how the 3D-designed joints have been optimized for full Zoloworld compatibility and for durability/robustness when printed. Here's a look at some of that hardware: 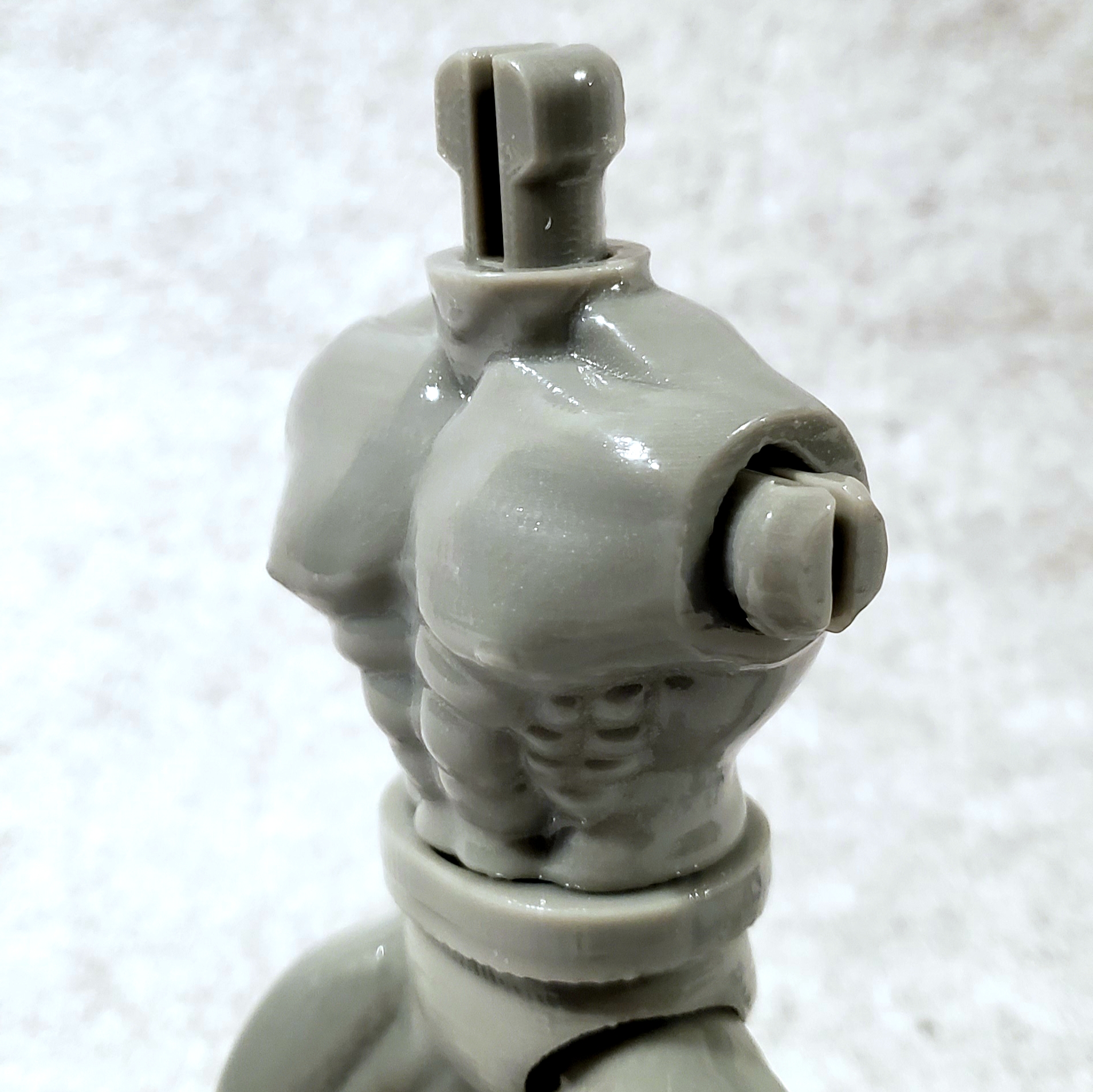 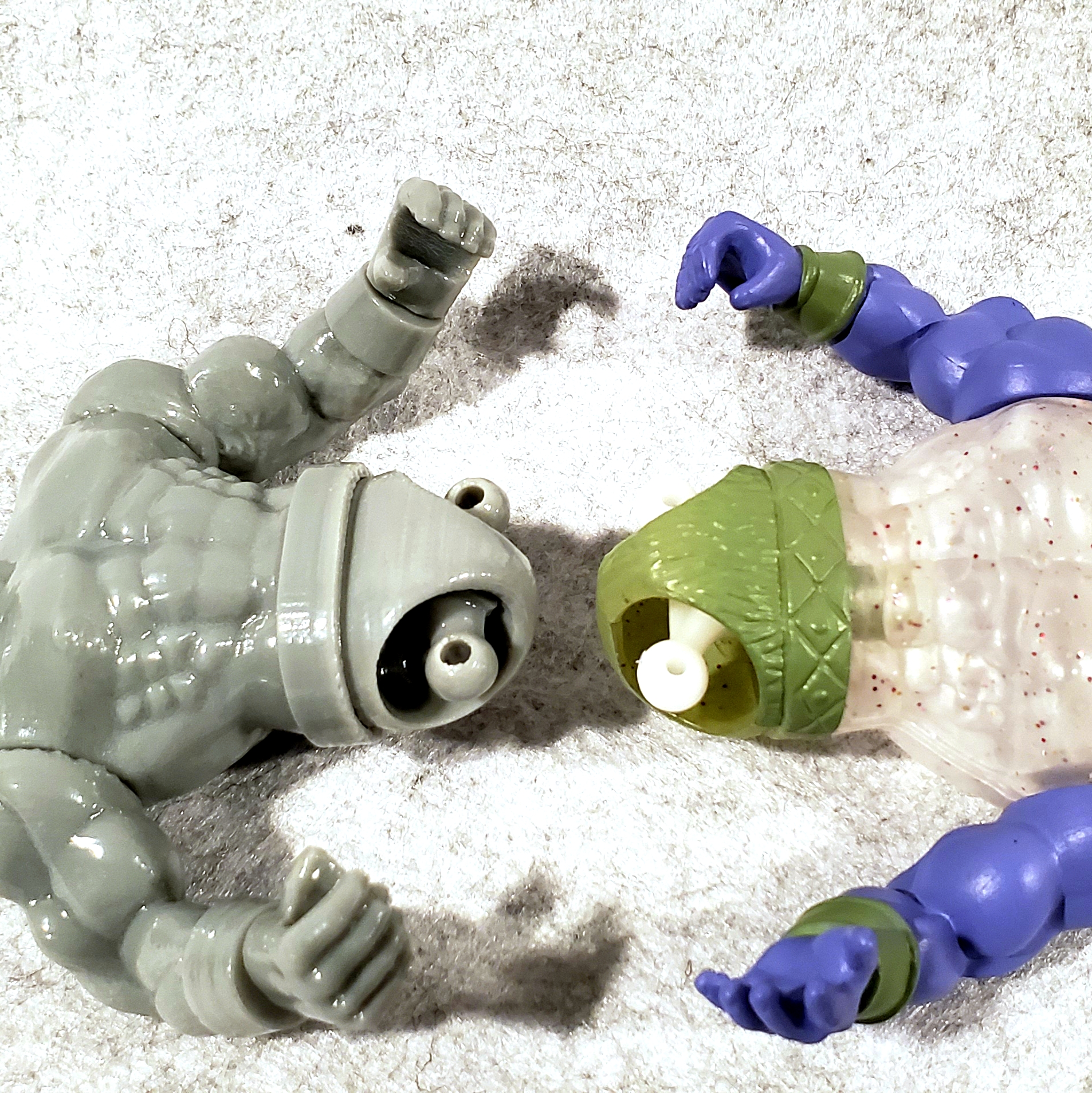 Pretty innovative geometry...but we're not here to bow before my mechanical engineering skills! We want to see that Zoloworld compatibility in action. 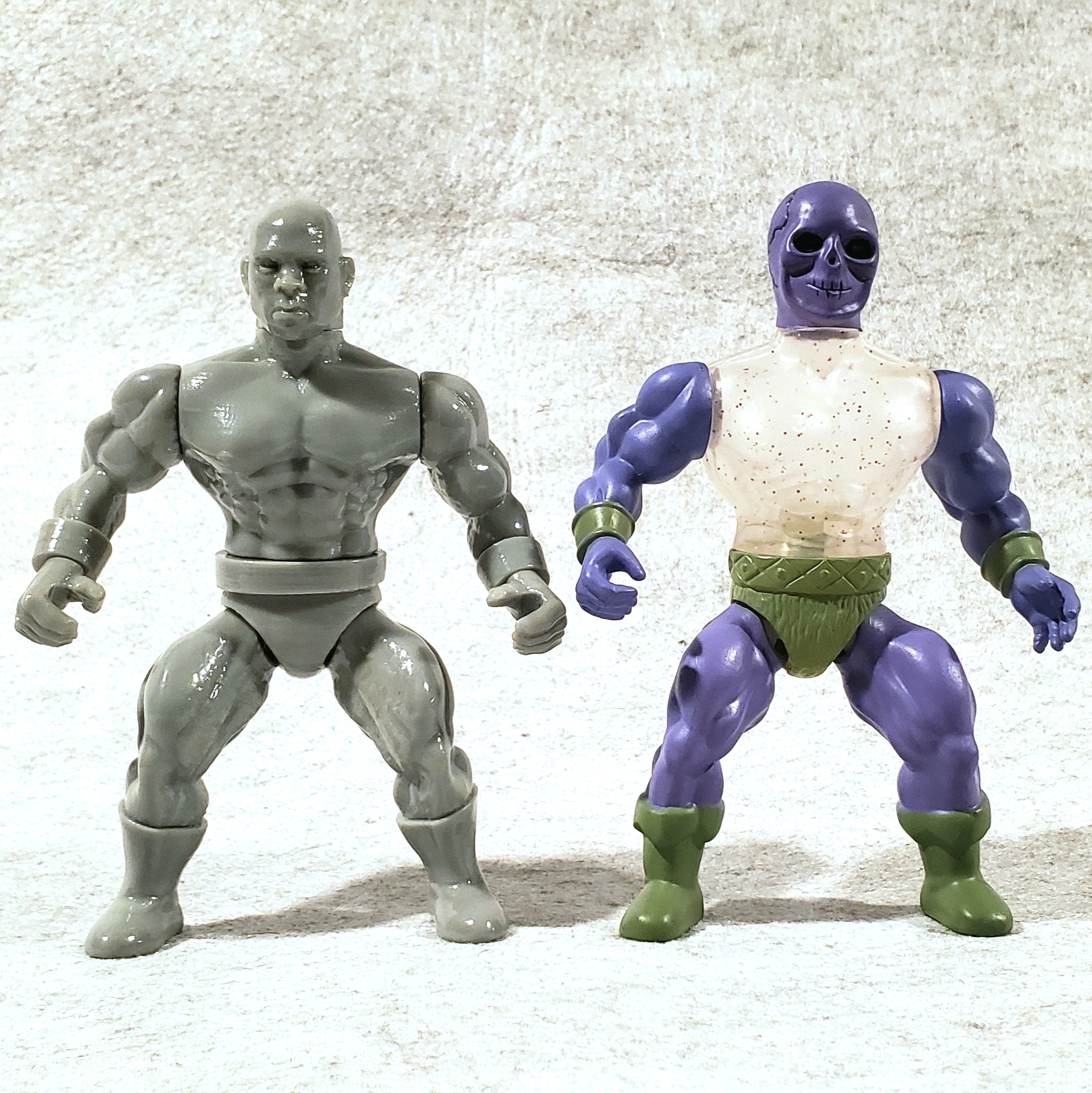 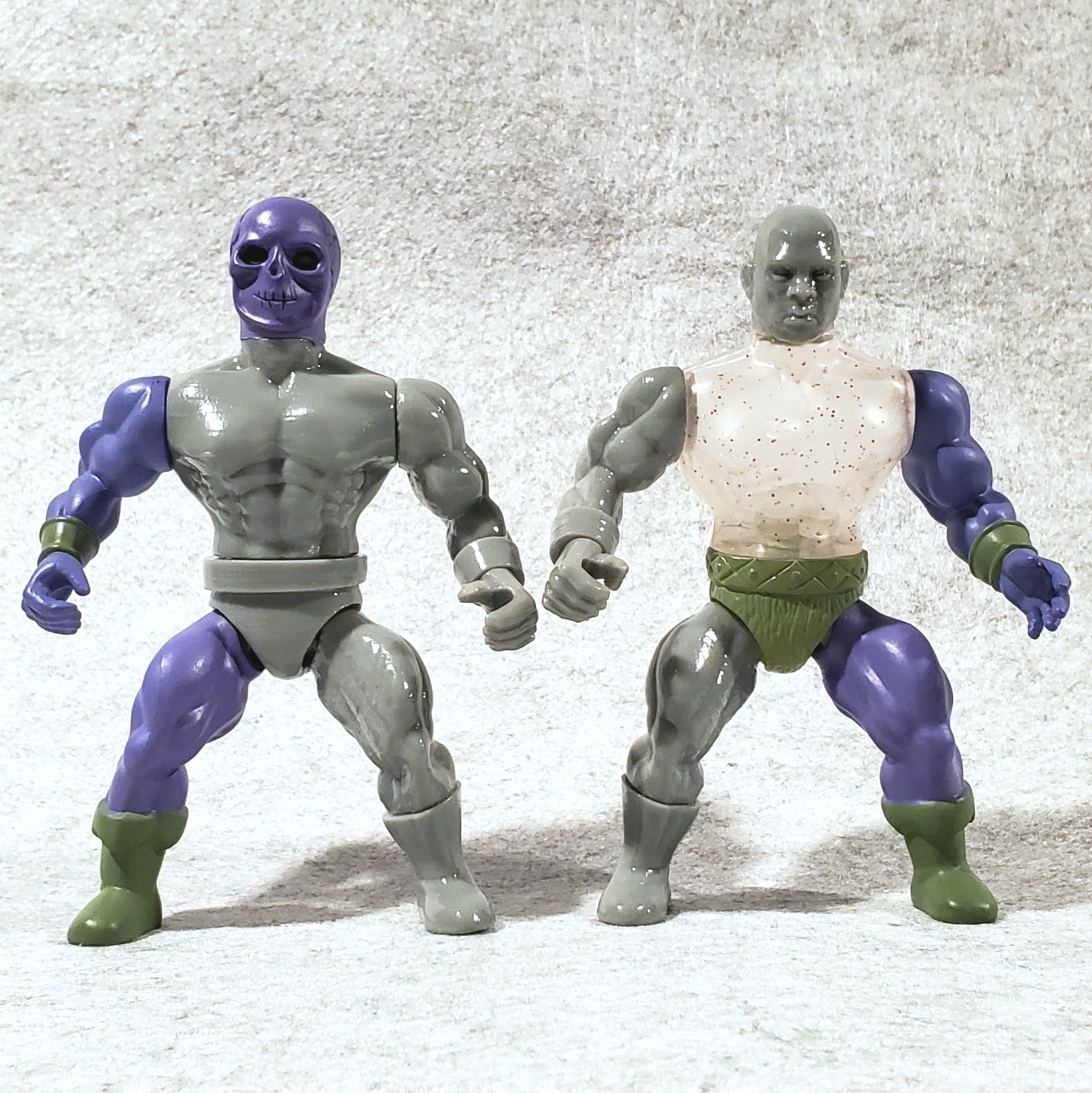 And as I mentioned before, this buck is a complete system...meaning that the *armor* developed for the body can also be used with most Zoloworld figures. That applies to the classic shoulder pads, the more recent two-piece chest armor, and the waist/skirt armor. Behold! 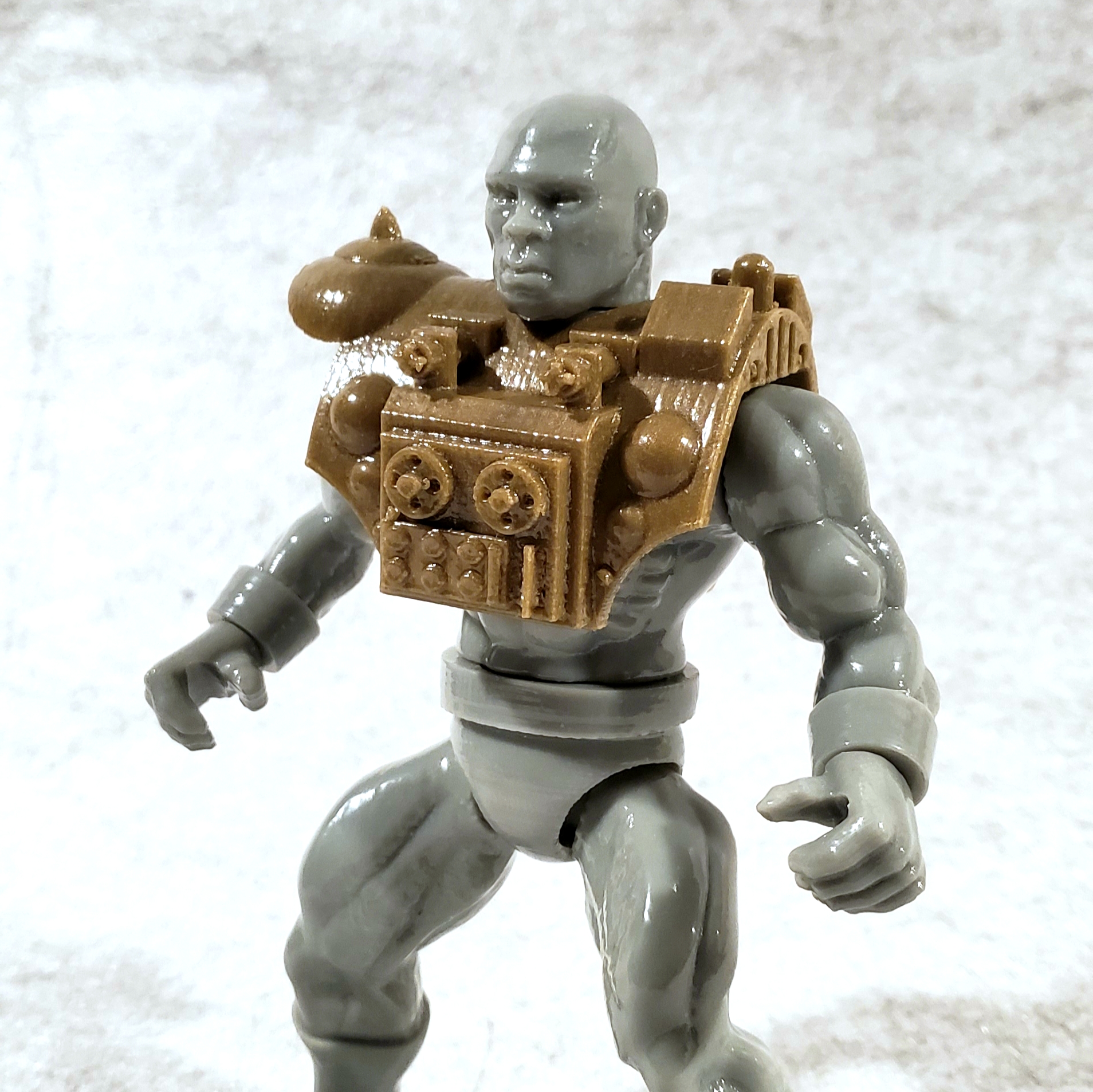 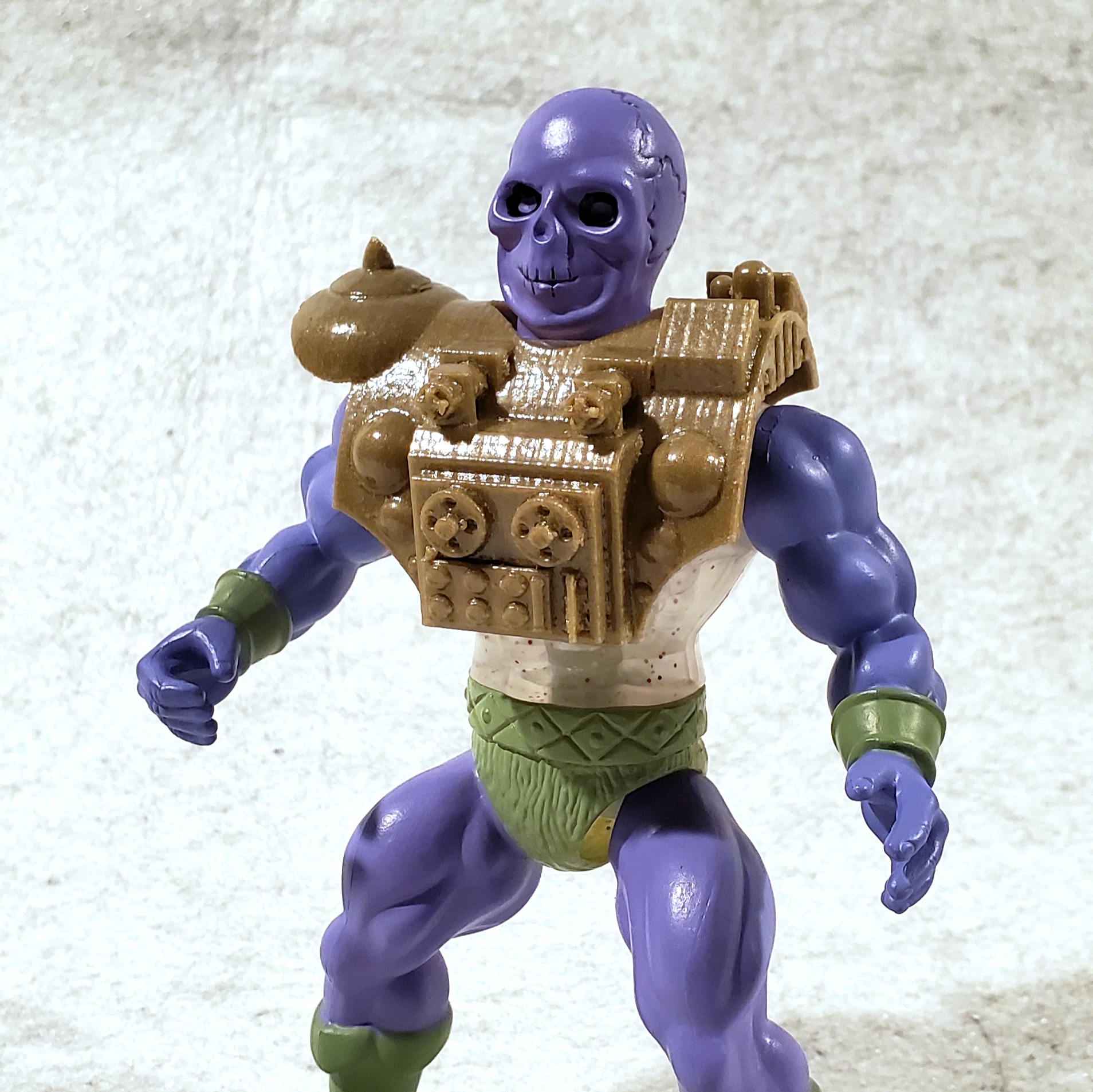 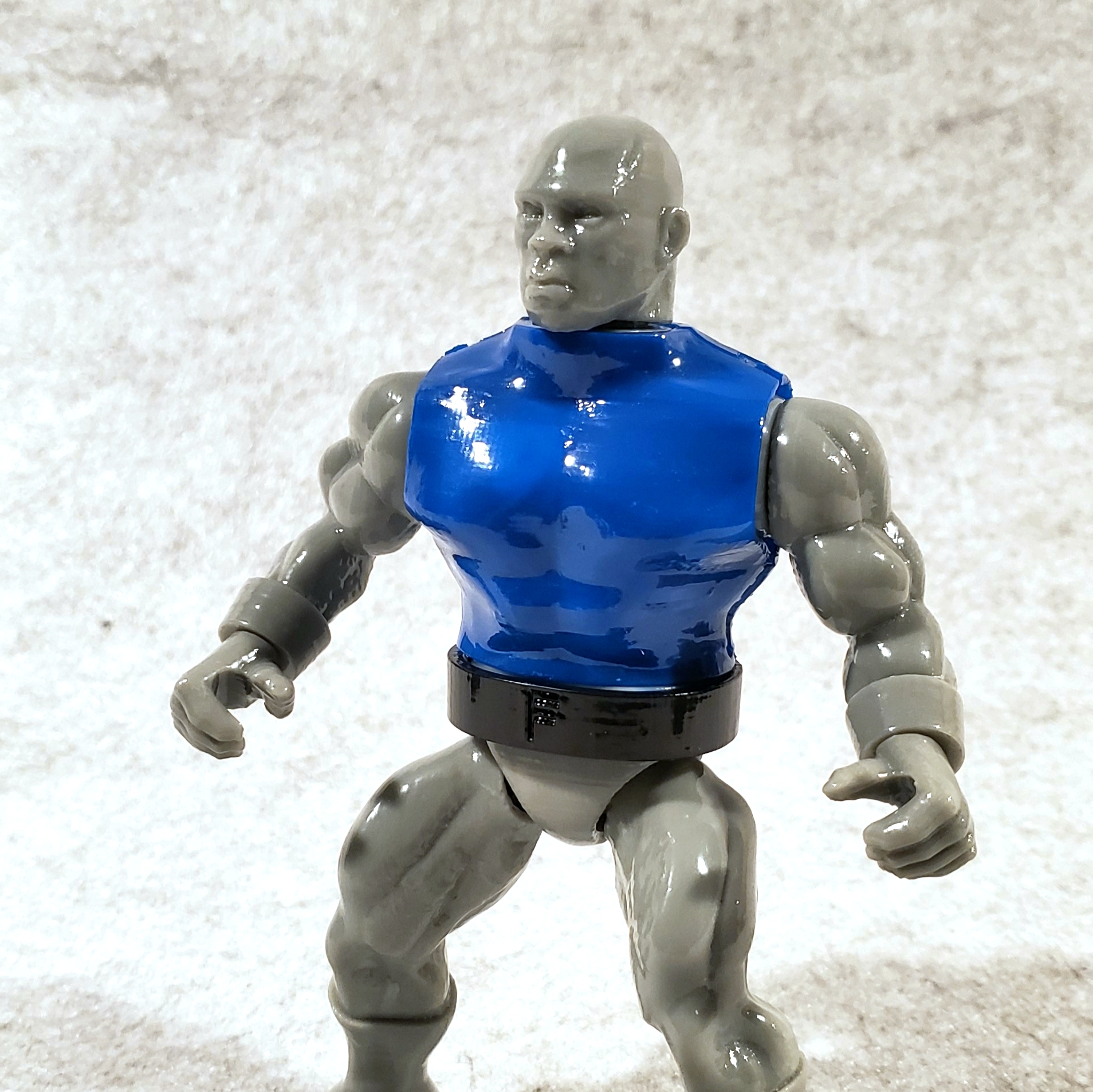 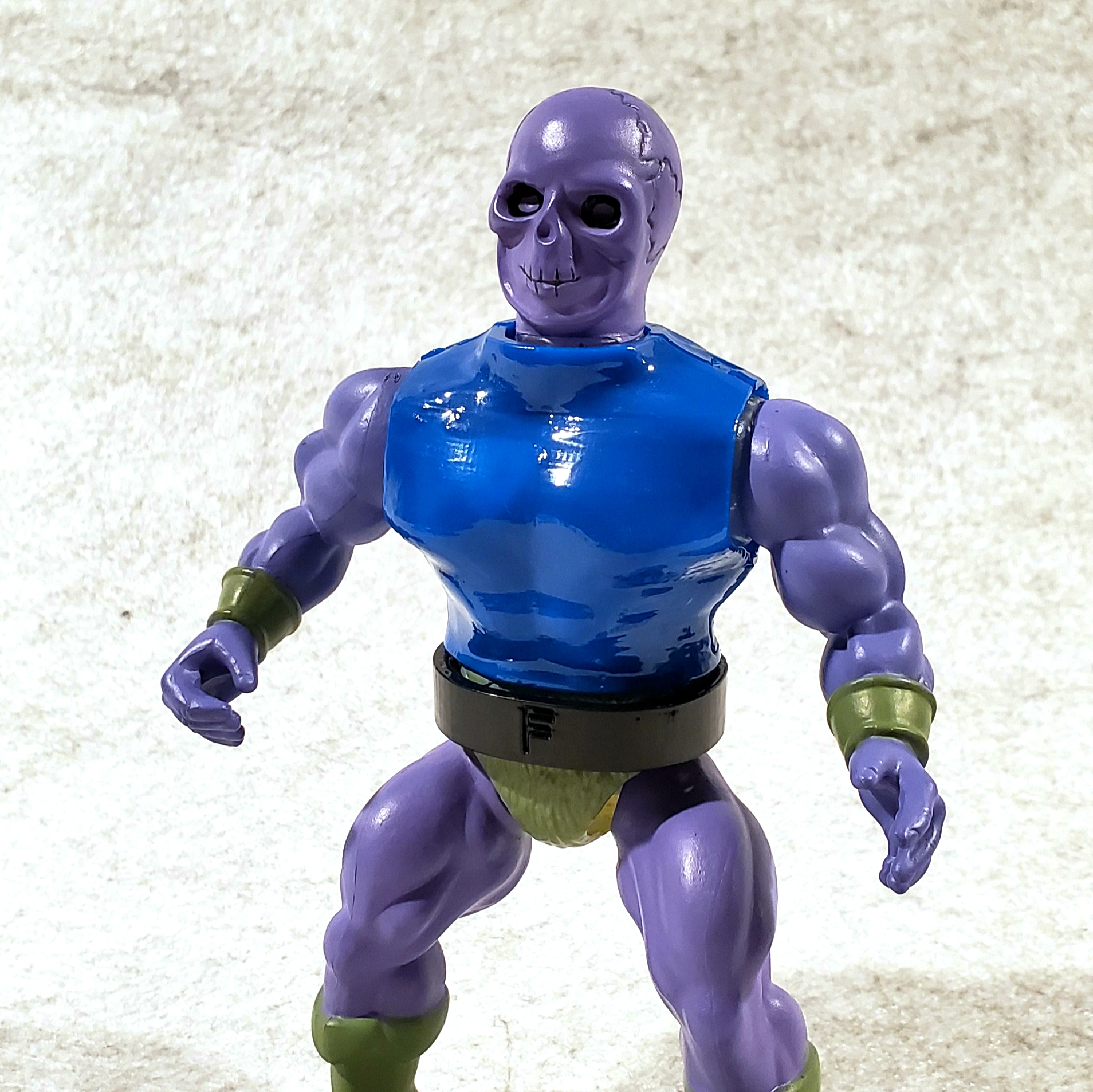 Well, that's about it, folks. This #brownnoize5point5 action figure buck--minus the dummy Quazarec head featured in the pics above--will be used in a variety of upcoming projects of my own, Doc Rampageo, and maybe even some collabs with the Z. Quazarec, himself, will definitely need an upgrade to the latest parts. He could also use some buddies. Maybe an arch nemesis. Perhaps even an official toy line. Zolocon 2020 is just over a month away...and there's still plenty of time for more announcements. ;)

Hope you've enjoyed this peek into what's going on in my corner of the multiverse! Happy New Year...and let's try not to blow ourselves up in 2020!

Got anything to add? By all means... 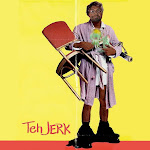 Sanjeev
Philadelphia, PA, United States
Welcome to the home of Brownnoize! As a DIY toy company, BN represents the collaborative efforts of myself and other artists and collectors of vintage Japanese toys. We want to share our passion for these classic robots and monsters through the individually hand-finished toys we produce. And to that end, we constantly strive to infuse our work with the aesthetic values and play patterns we developed as children of the 70’s and 80’s. But while we take the creative process and our expression very seriously, we never lose sight of who we are or where we came from. And I'm never tough to get ahold of!